Materials: balloons, an air pump, scissors, a permanent marker.
We are going to make a spider. Spider sculptures are very popular during the Halloween season. That is why I use Halloween colors: orange, black, purple to make them. Of course we can use different color balloons as well. Inflate four purple balloons leaving about one-inch flat tail (Pic 1). 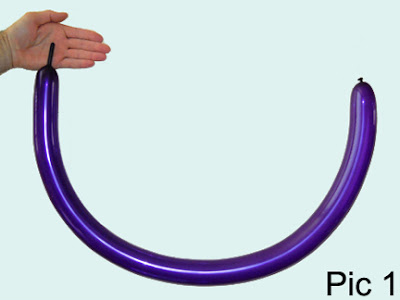 Squeeze the balloon forcing the air inside to the end of the flat tail. We are going to use one balloon to make a pair of spider legs (Pic 2).