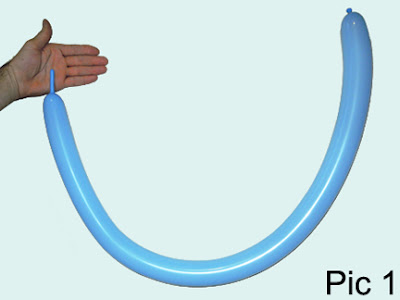 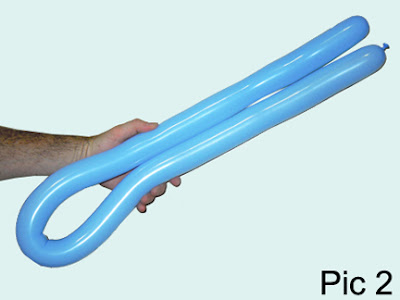 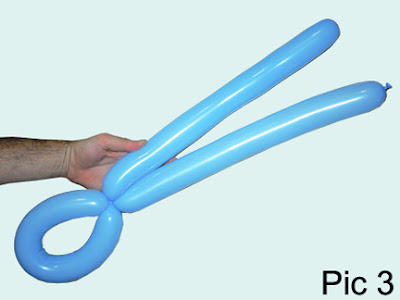 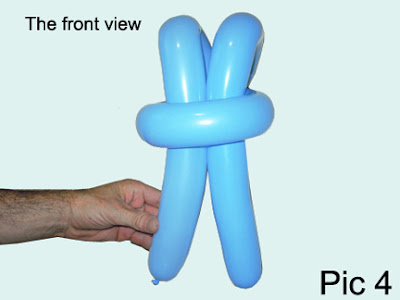 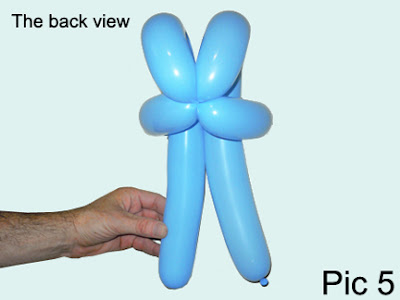 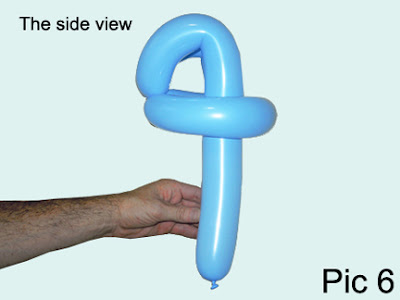 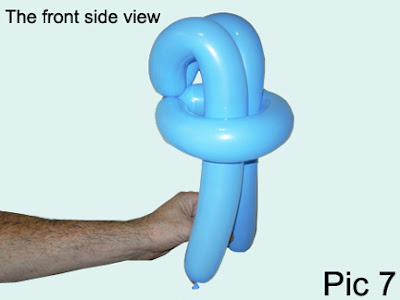 Inflate the white balloon leaving up to two—inch flat tail. Prepare it in the same way as we did the first blue balloon. Squeeze it, get rid of the flat tail. Again, we have to twist three bubbles. And we are going to do it in almost the same way. There is only one difference. We have to make the middle (the second) bubble a bit shorter. Hold both halves of the balloon about five—inch away from the center of the balloon. This time the loop of the middle bubble should be big enough to fit loosely just two balloons through it. Twist all three bubbles in one move. We have made the arms (Pic 8). 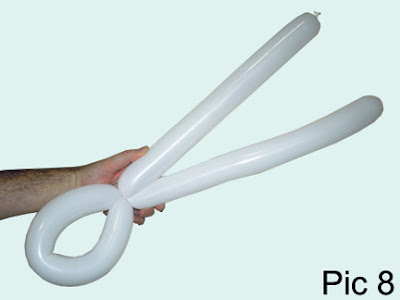 Now we have to assemble the body. Force both ends of the blue balloon half way through the loop of the middle (the second) white bubble. We put the middle (blue and white) bubbles right next to each other. The white bubble at the bottom and the blue bubble at the top. Make sure to keep ends of the white balloon at the back of the sculpture (Pic 9). 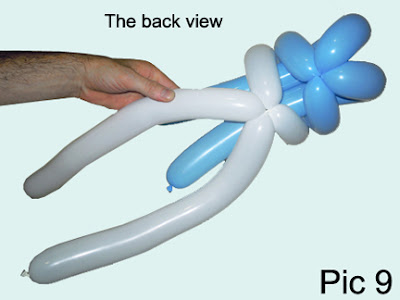 Pull ends of the white balloon one by one through the loop of the blue middle bubble. Keep the blue bubbles of the torso together. And the white bubbles go to the left and the right site of the torso.  Congratulations, we have made the body (Pic 10 and 11). 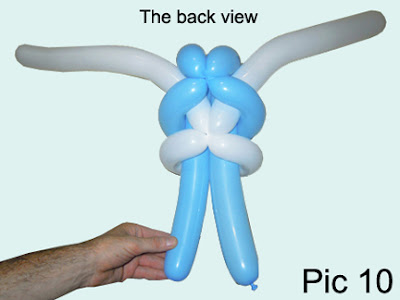 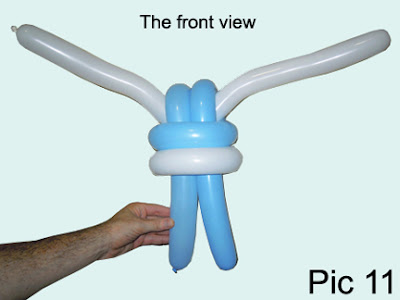 We can attach different head to the body. Below is an example where I use two faced head. Force the neck bubble of the head from the top between blue bubbles of the torso (Pic 12). 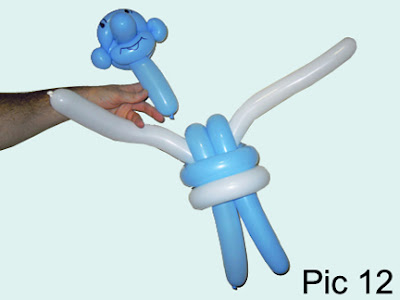 Congratulations, we have made the smurf (Pic 13). This sculpture has two front views (we use two faced head)! 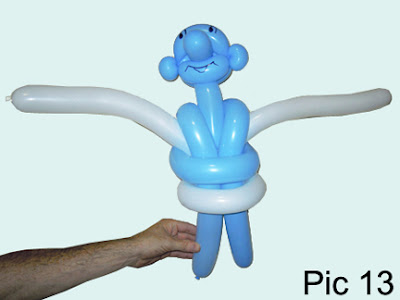 Here is the front view of the monster (Pic 14). 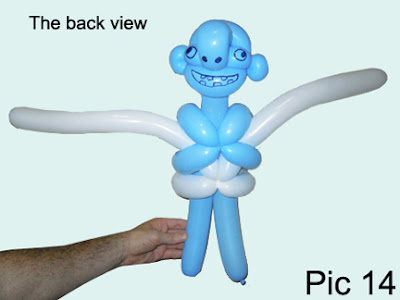 Now we are going to make the simplest hands. Twist one inch white bubble at the end of the balloon (Pic 15). 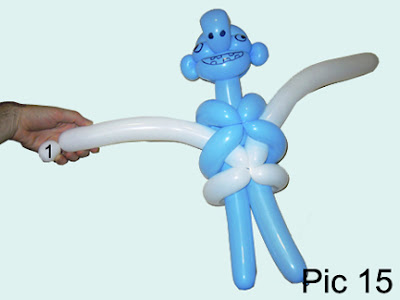 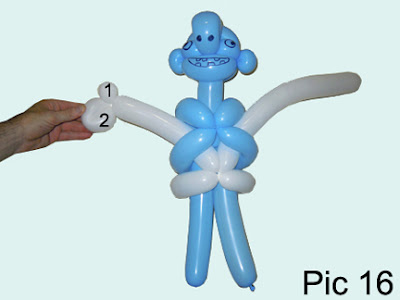 Make the second hand in the same way on the other end of the white balloon (Pic 17 through 22). We can make feet in the same way. Though I would rather use different balloon to make the feet and then attach them to the legs, to the ends of the blue balloon. I use different color balloons to make this body for different sculptures. Red balloons for Santa Сlaus. Green color goes well to make bodies of elves, witches, monsters, aliens. And as I have mentioned before, blue color is good for making body of smurf.  Have fun and happy twisting :) 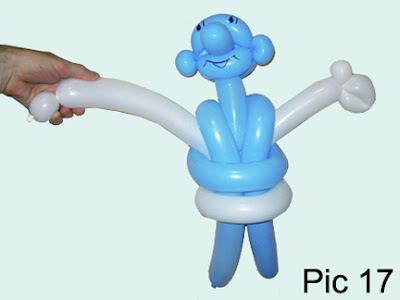 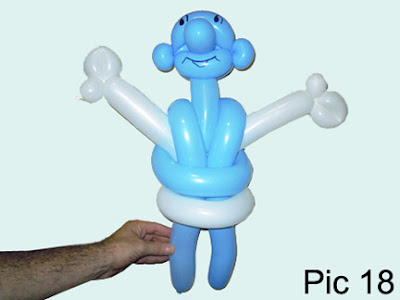 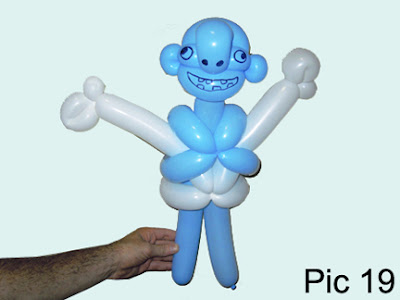 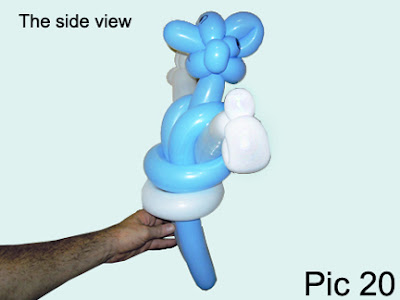 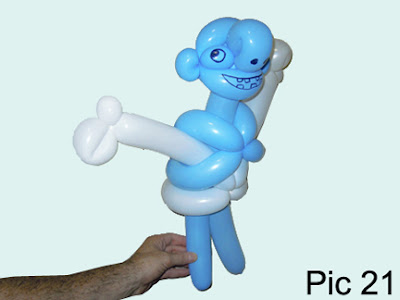 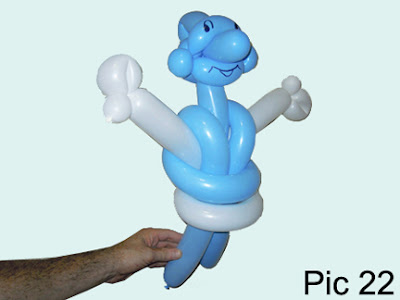 Posted by Michael Langerman at 5:07 PM
Email ThisBlogThis!Share to TwitterShare to FacebookShare to Pinterest
Labels: body