Supplies: balloons, an air pump and scissors.
I am going to use a pair of blue, a pair of red and a pair of white balloons to make a variation of Uncle Sam hat - the iconic national symbol of USA. It takes total of six balloons. Inflate all six balloons leaving about 3 - 4 cm flat tails (Pic 1). 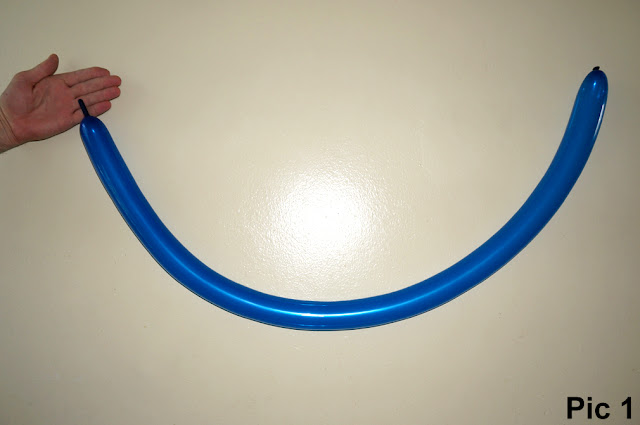 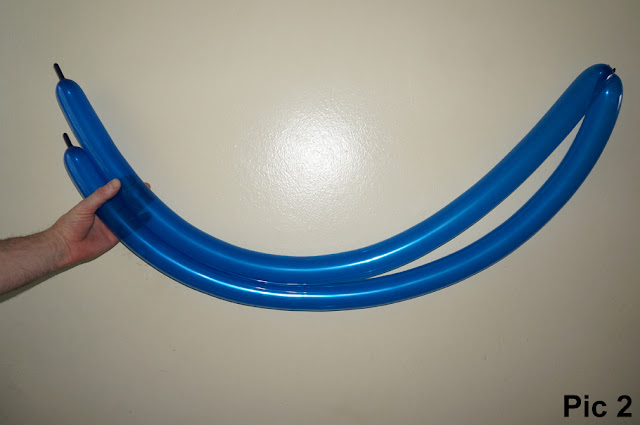 Place balloons of the same color directly across each other (Pic 3). 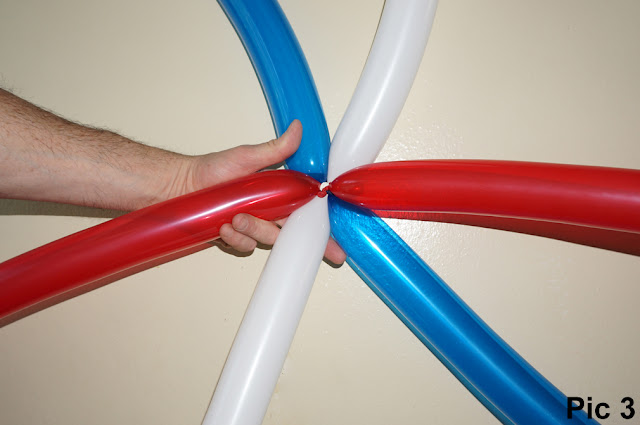 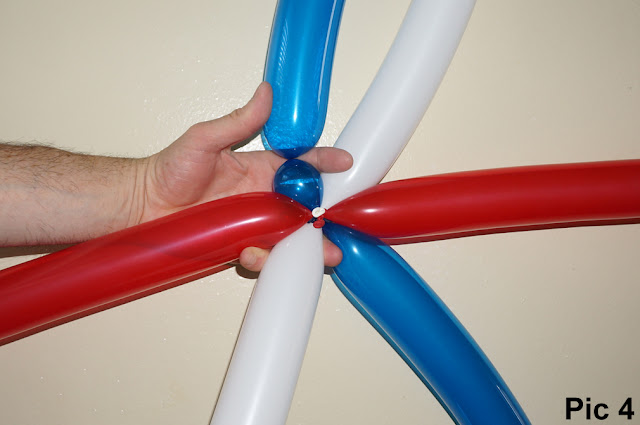 Lock both ends of this blue bubble in one lock twist (Pic 5). It's an additional bubble to cover the knot at the center on the top of the hat. 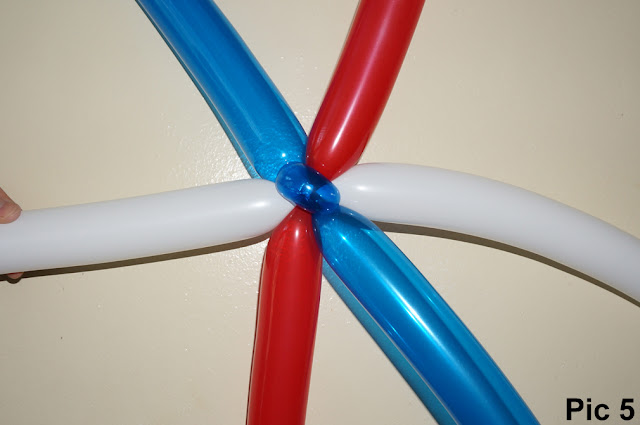 We are going to work all balloons in the same way using the same balloon waving technique as in previously published instructions cake, umbrella and etc. Measure the size of your head before you start making the hat. Divide the size of the head on number of balloons (six in this example) to find the size of bubbles you have to twist to make the base of the hat.
In this example I work the hat starting from the top. We can make the top of the same size as the base. We can make it wider than the base or we can make it narrow (up to 0). In this example I want to make the top of the hat wider than the base. The top of the hat will consist of six equilateral triangles. Let's make the first and the second bubbles of about 15 cm long.
Twist the first and the second blue bubbles. Twist the first white bubble (Pic 6). 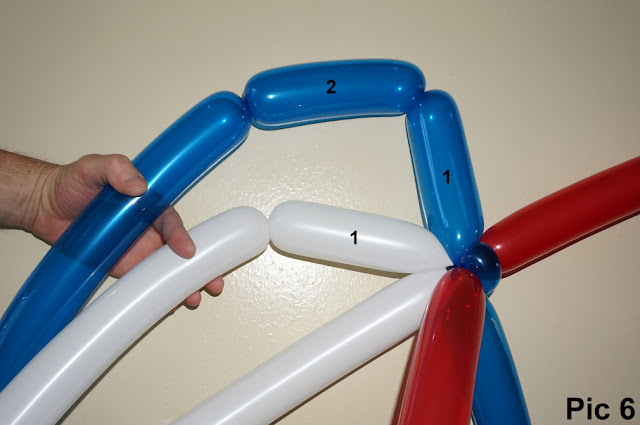 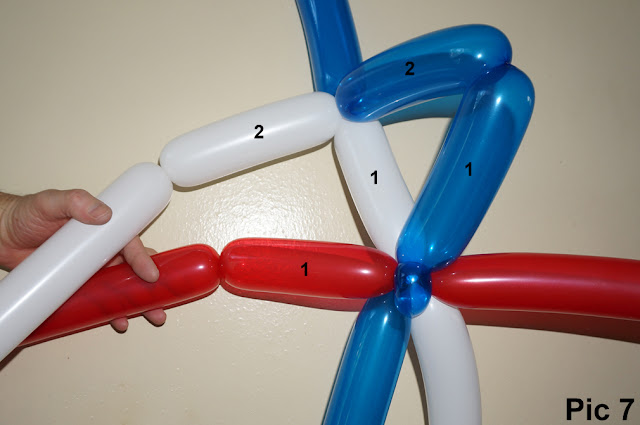 Lock free ends of the second white and the first red bubbles in one lock twist. Work all balloons in this way around the sculpture (Pic 8). We made the top of the hat or the first row. 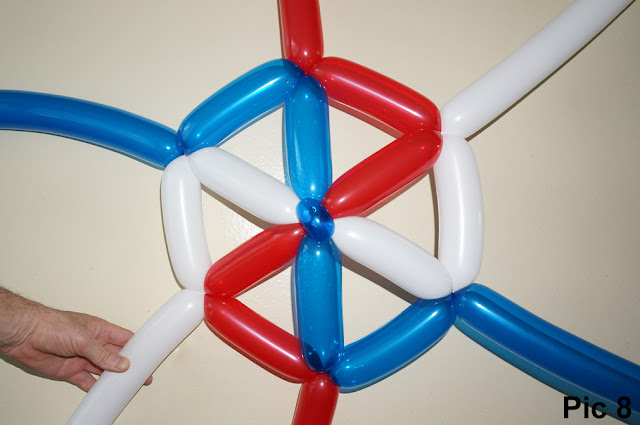 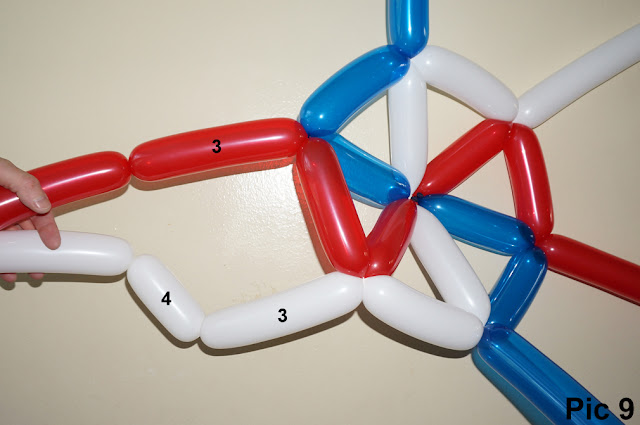 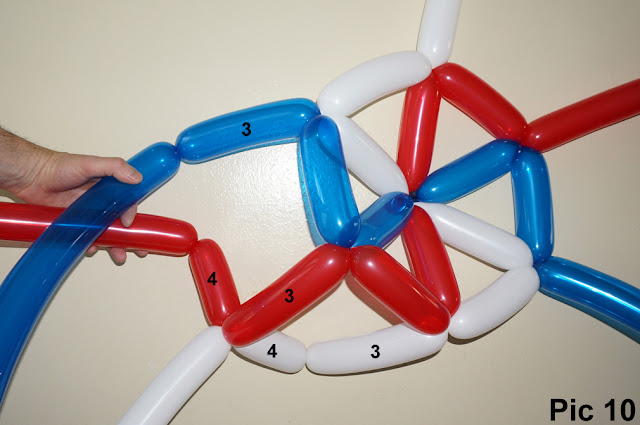 Lock free ends of the third blue and the fourth red bubbles in one lock twist. Work all balloons in the same way around the sculpture (Pic 11 and 12). We have made the base or the second how of the hat. 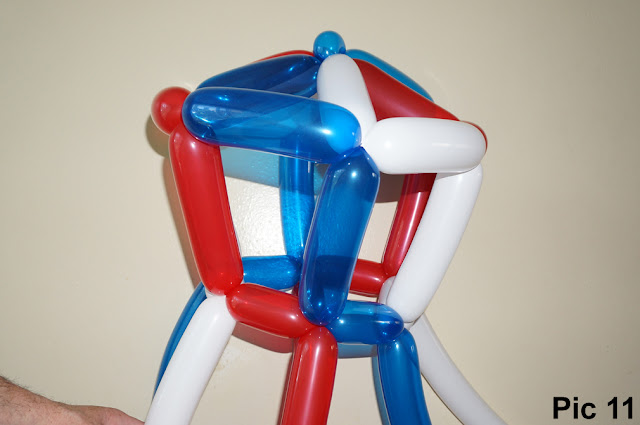 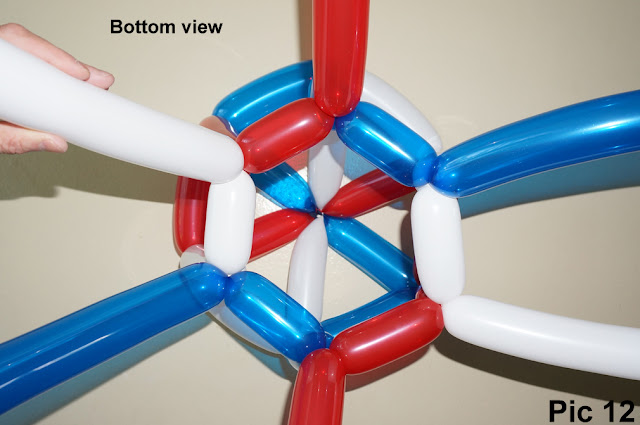 The size of the fifth bubbles defines the size of the brim. It's safe to work the brim starting from the shortest balloon. In this example I want to make the hat with broad brim. Let's make the fifth bubbles of about 18 cm long. And the sixth bubbles I will make of about 25 cm long. You can adjust size of bubbles as it fits - just make sure there is at least about 3 cm bubble at the end of the balloon (Pic 13). 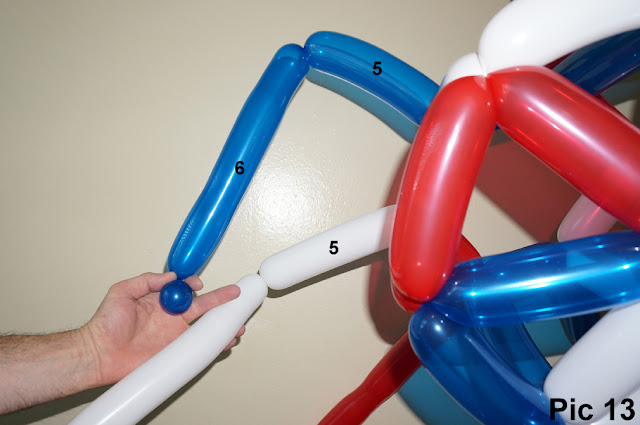 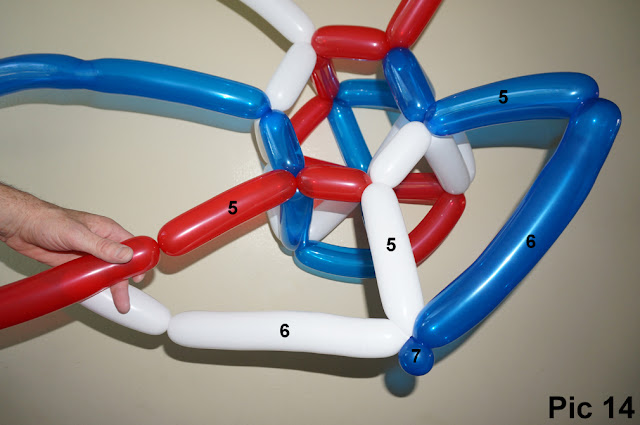 Lock the free ends of the fifth red and the sixth white bubbles in one lock twist. Work all balloons in the same way around the sculpture (Pic 15 and 16). Congratulations, we have made Uncle Sam balloon hat! 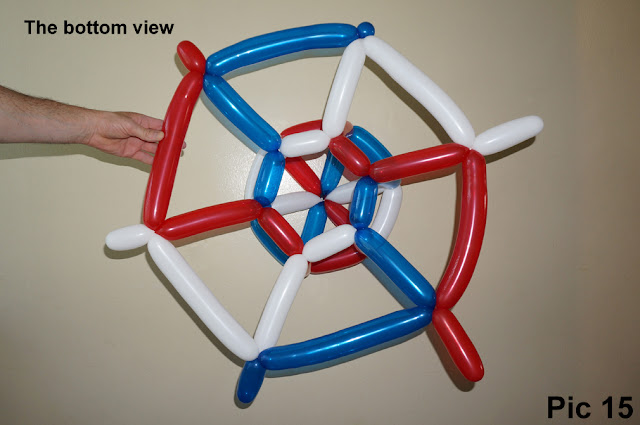 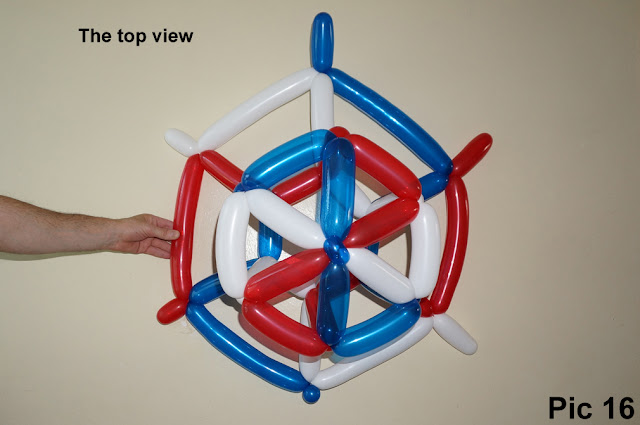 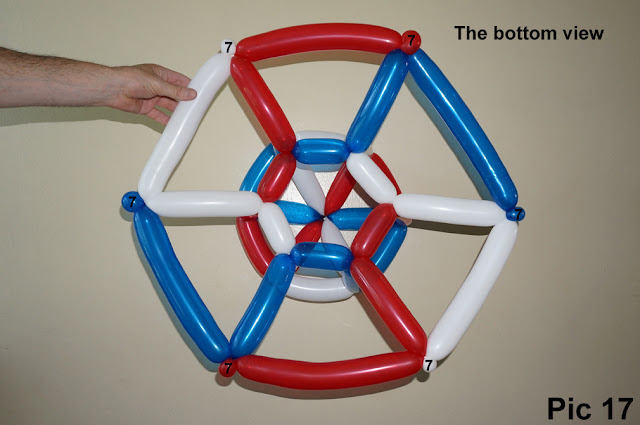 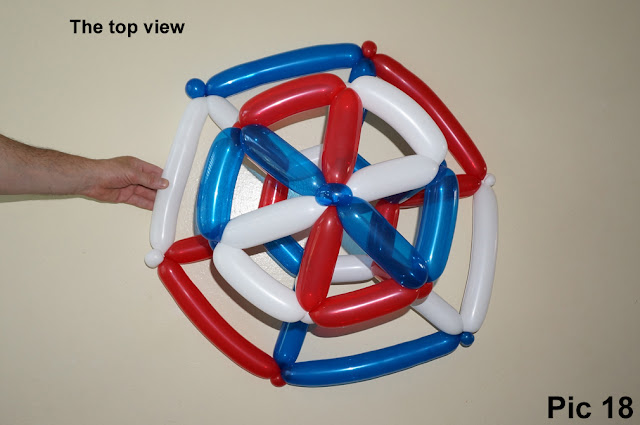 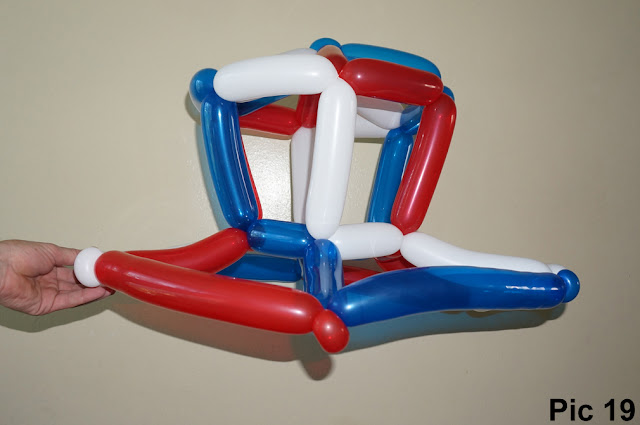 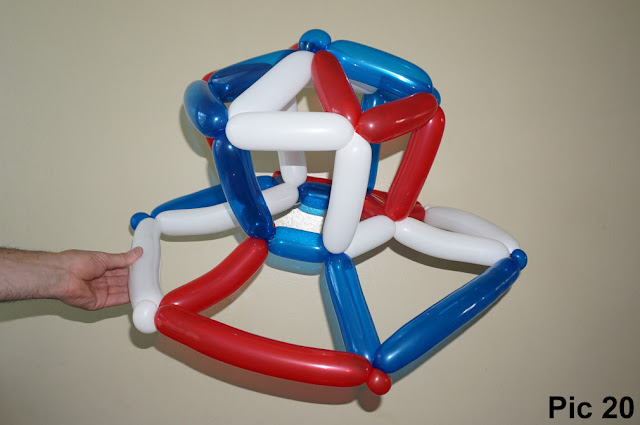 On this picture you can see how this hat looks on me (Pic 21). 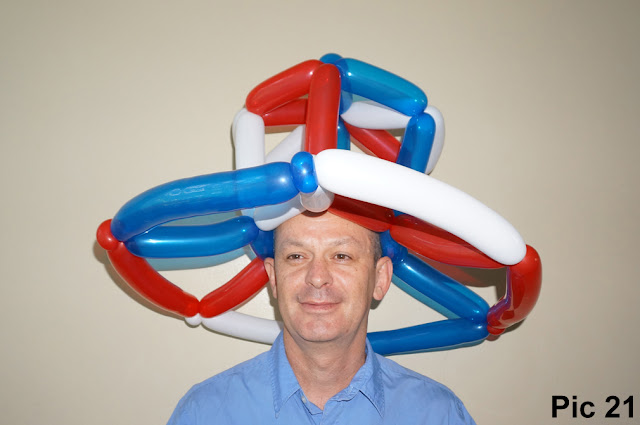 In the following pictures you can see two different hats. One hat has the same color pattern but I made it higher and with narrower brim. And the other hat I made using different color pattern by changing direction in which we work balloons in every row. 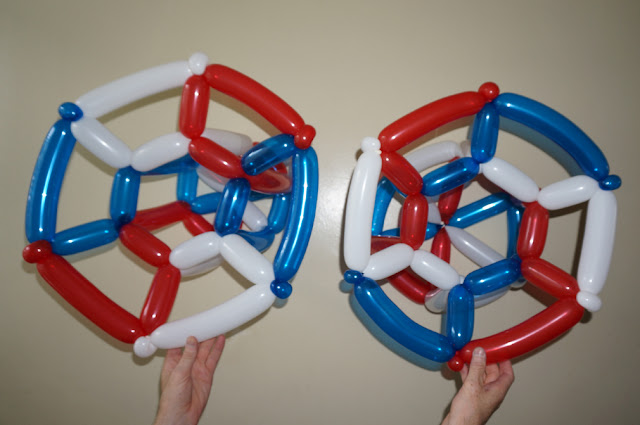 And I made the top of the second hat as wide as the base. 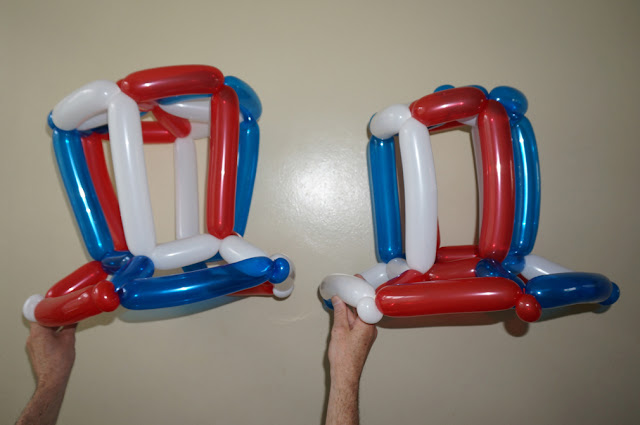 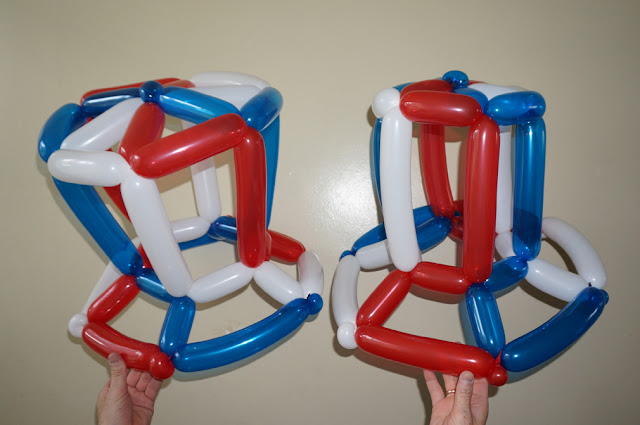 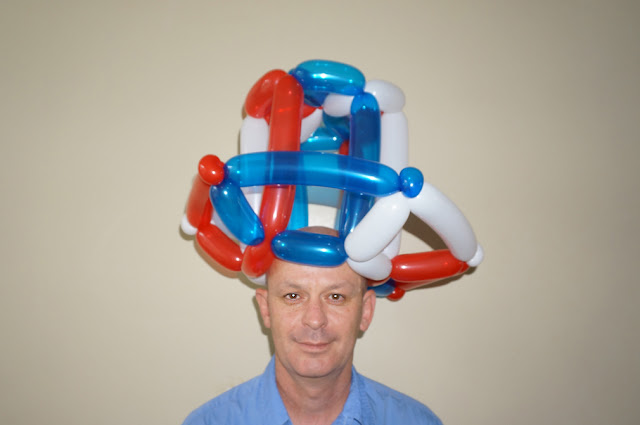 You can make any of this hats for July 4th or Memorial day - most Americans will instantly recognize them as Uncle Sam hats. Even people in Europe or Asia will recognize the iconic symbol of USA! However, people in many countries (Great Kingdom, France, Russia and many other) may say that this hat represents their nations. And it's true! Red, white and blue - maybe in different orders, but those are colors of many nations. We speak different languages. We leave in different places. We have different culture. But, we all have the same roots - we are human.
My grandfather went through all years of World War 2. He managed to get home in one whole piece with chest full of medals and rewards. He was a war hero. He never talk much about the war. Just one time he told me. He been facing our enemies days and nights for many long years. He fought many battles, but told me about one. They came to hand to hand combat. And then, suddenly, he saw American solders in front of him, not our enemies - our friends! Some men hugged, some cried. They knew that the war was over. It was the happiest day of his life.
I asked him how he become a war hero. My granddad told me -"Men do what they have to do. That what makes them heroes!"
As a balloon twister I can make many people happy. And as you know...happy people don't fight!
Art for piece!
Have fun and happy twisting ;) 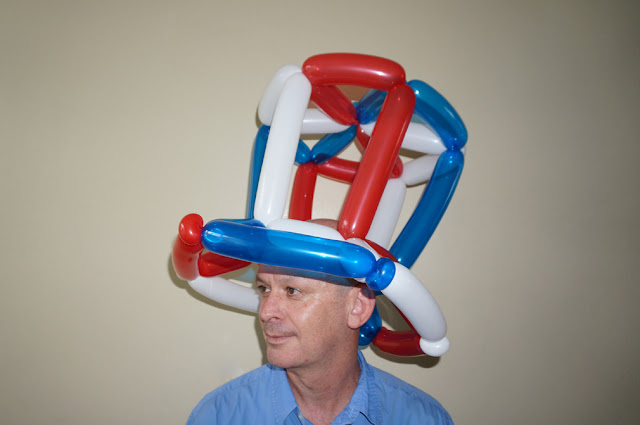 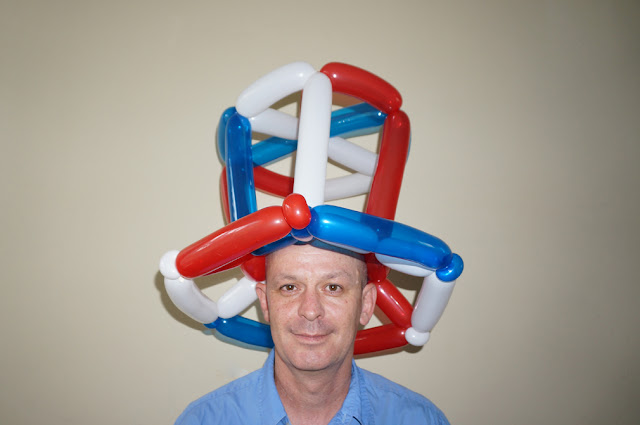